Kink of the Week is on one of my favorites. To KISS (keep it stupidly simple), I am just going to answer the questions.

"Knives excite a lot of people. They scare a lot of people too."
Just yesterday a friend of mine told me that he's terrified of being stabbed. He has something against knives. He's in the military, and has no fear of being shot, but a serious fear of knives. I found this odd; knives have always excited me (and I think being shot is worse).

Sexually, I began playing with knives with a boyfriend that taught me sword fighting. This man was masterful with a blade in general and I wasn't afraid in the slightest when he suggested that we incorporate one in bed. The first time the smooth flat part came in contact with my hot flesh I was sold. The contrast in temperature was amazing. It moves smoothly, effortlessly across the skin. The tip of the knife scratches its way, leaving a tiny trail of such precision.

"Does the sight of a knife’s sharp edge excite you, make you afraid, do both? What about the feel of a knife?"
A knife does both for me. I have trusted two partners to bring a knife to me, though I have used a knife on more. With my current lover, we were talking in a parking lot in his car and I saw that he had a ka-bar. It was in a sheath wedged between the center and his seat, so I grabbed it. The weight was so heavy, so solid, the edge so sharp and smooth, the flat of the blade was thick and dark. I loved the feel of this in my hand. "What are you doing?" he asked, curious. Suddenly, impulsively, I straddled him and put the knife up to the side of his throat. There we were, in an abandoned parking lot, in a car, and I had a knife to his throat. He just calmly looked at me, a steady gaze, queried again, "whatcha doing, babe?" and I melted and fell in lust with him.

"Ever played with a knife?" I whispered in his ear, nibbling on it, on the other side of him gliding the flat of the blade across his neck, going slowly from behind the ear to below it, across the side of his neck, against the pulse, slowly down to the front dip between the collarbones. I breathed heated breaths against his neck, moved back a little, and swiveled so that the knife tip so very gently followed the collarbone towards me and arched up the side of his neck, softly moving up to behind the ear I had just recently nibbled.

"No," his voice had a deeper timbre to it, "but I think I've been missing out on it suddenly." 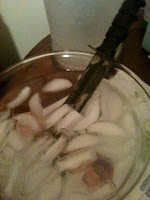 And there needs to be more than sensation play, I need to excitement and fear of a knife. I love that absolute concentration required, that the person wielding the knife is skilled with their hands, that the person receiving the blade is still, focused on the sensation, and above all trusting of the other. A cold knife at my throat is exquisite, the tip of the blade scratching softly at my nipple or gliding flat blade across and making them pucker makes me breathless, and the any part of it moving up and down the inside of my thighs makes me tighten in desire.

Posted by cammies on the floor at 8:16 PM