A writing prompt "Spring Break" from Prowling with Kat, made me think about spring break sex in general, which always tends to be hotter since the kids normally are gone at least a night or two, recently it's been for the entire week. It's impossible, given this recent trend, to reflect on one night of such exquisite passion, when there are normally so many experiences to choose from. Even if they aren't sex, they are sex (or sexy) related. So....

Snippets of thoughts run rampant when I reminisce about this spring break...

Dropping the kids off at the airport, suddenly I am no longer defined in the role of "mom";
I shed even a semblance of responsible adult, and ponder my next move.

Within minutes of the plane leaving, I get a text from husband: "sex store today....?"
I text back, "sounds good lover. Can we use the knife today too?"
"Yes"
Well, there's my first day spoken for once he gets off of work...

Hot Wax
We didn't end up using the knife that first day. At the sex store, we picked up some candles. This was on our "curious" sex bucket list. So we figured: now would be the perfect time to try it out. First off, we played with the candles just goofing off, without putting the hot wax to any skin. It was more about technique - how does it splatter? Where does it drip? How to get the smaller drips versus the larger amounts? Then we had sex for a long time, trying some things we hadn't in awhile. After the glow of sex was gone (which we realized we should've used candles while we were still sensitive), I decided to put a towel under my husband and decide to try the wax. He wanted it on his thigh first, from a far distance. He is a good sport: I was interested in wax play, but I wanted him to be the experiment first. He didn't like it in the inner thigh, but the outer thigh he was ambivalent about it. Then I persuaded him to move up the chest, where I played around with my aim, and watched him arch and writhe about deliciously as the wax covered various parts of his wide chest, and dribbled upon his nipples. He wasn't sure how he felt about it when the experience was done.

Next, it was my turn, and he wanted to start on thigh as well. I rolled over to the side slightly - I figured less chance to get the inner thigh, and he dribbled wax on me. It felt okay, but I could see the appeal if I were already sexually heightened. A bit fell and splattered onto the opposite thigh, hitting the inner most part right before getting to my sex, and that felt a little too overwhelmingly hot. It stung in the spot for quite awhile. He moved up a little and started dripping the wax on my hip and ass, and my ass also didn't appreciate the hot sensation quite the same. "I can see you're going to like this," was his final statement about the whole thing, and truly I am the one getting more into other sensation plays, so he may be right.

Final verdict: we promised to give it a go again, especially immediately following some sex or foreplay. One thing to cross off of our sex bucket list (woohoo for trying new things!).

Edging
My husband really doesn't deny anything I want. This includes orgasms, so when I suggested edging, he was surprised that I would try it. And he was also concerned about his own self control.

Well, we tried it and edging was frustrating, and funny, and ah-mazing. He even chuckled a few times at my noises of frustrations, my body arching and trying to push us there. He whispered a few times, pondering: "I wonder if I can do this again?" and did. And the final result was blissful, relieving, and so hard. He described me as tightening up for so long with no relaxing, almost "locking down" on his shaft to prevent him from denying us any longer.

Downside: I am quite capable of multiple orgasms, but I take my lover on this type of journey where he has no choice but to join me, then I am not having multiple orgasms from sex. Of course, there are other ways around that if I truly desire them, and truly one orgasm is plenty.

Sisters
I also planned a visit with my sister, who is on a picture high, and wanted me to bring lingerie to her house to snap away at me. She's getting very good at using her phone to take pictures (as you can clearly observe if you follow us on twitter). She's also a master at hair and makeup.

The result is the photos of me are stunning. I am not used to photos of me being taken, little lone liking them, but the results were stunning. Even my husband liked them (and that speaks volumes). 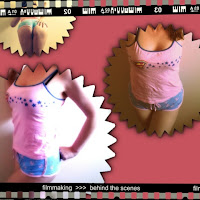 I am a tomboy at heart, and one that doesn't really focus on being sexy too much (I'd like to think I just naturally am, but who wouldn't?). A told me to wear something sexy, so I put on some boy shorts and tiny tank top - did I mention that they were superhero? Okay, so maybe lingerie isn't even my strong suit, but she rolled her eyes when she saw what I chosen first and just snapped away. Honestly, some of the first ones are adorably cute.

I also had a the brand new issue of having a bruised butt cheek (woohoo!) from my husband (who had read a blog I had posted about spanking, and then followed through on my fantasy). My sister had to apply cover up all over both my ass cheeks so that it blended, an experience we both thought we'd never say outloud: somewhat like, "I write sex blogs with my sister and am constantly getting naked photos of her text to me".

When my sister said give me a sexy look, she ended up nearly in tears laughing at my pitiful and clearly not sexy efforts. I can't do serious, or focused either. Pouty? ...uh uh...not on command, and it certainly wasn't sexy. And yet, somehow she masterfully posed me and snapped away at so many different moments that I now have a hot little collection for my husband to view upon...and possibly some for our twitter or blog (I've already posted one of the about M section of our blog, and one on twitter).

Whew, being sexy is hard....probably more for my sister to make me sexy than for my failing efforts. Thanks A!

Orgasm Challenge
Through twitter, this competition Orgasm Count is taking place. Knowing I can hit multiple orgasms, she exempted multiple orgasms in the competition. John D Stories is all about keeping this fair, and he's awesome in general. He created the site, and through conversations, hilariously created the rules (seriously, check them out, and feel free to join as well!).

I guess to be fair, though I'm a little saddened, multiple shouldn't count. Sunday alone I hit between 20-25 orgasms in the day, but to be fair there were unusual extenuating circumstances at work:
1) No kids, yep that rarely happens;
2) Husband was actually home ALL DAY (rare again);
3) We didn't go anywhere or have anything we had to do; and,
4) I was sad I didn't have my kids, so my husband was willing to have sex more often than normal to cheer me up. Way to take one for my happiness, babe.

And my husband got a tattoo, actually the first session of a cover up that literally covers up the majority of his back from the tip of his shoulders to the top of his ass. They also had to go around the scar tissue the original tattoo gave him (lesson to be learned: don't get a tattoo in a foreign country spur of the moment that covers an extremely large part of your body). Sometimes I am tempted to share photos of us - the size difference between the two of us is stunningly drastic, but this tattoo marks and identifies him too greatly.
Posted by cammies on the floor at 10:19 AM